A Saab Seaeye Falcon electric underwater robotic vehicle is to help support a network of oceanographic and atmospheric sensors that are part of the Ocean Observatories Initiative (OOI) transforming ocean research. 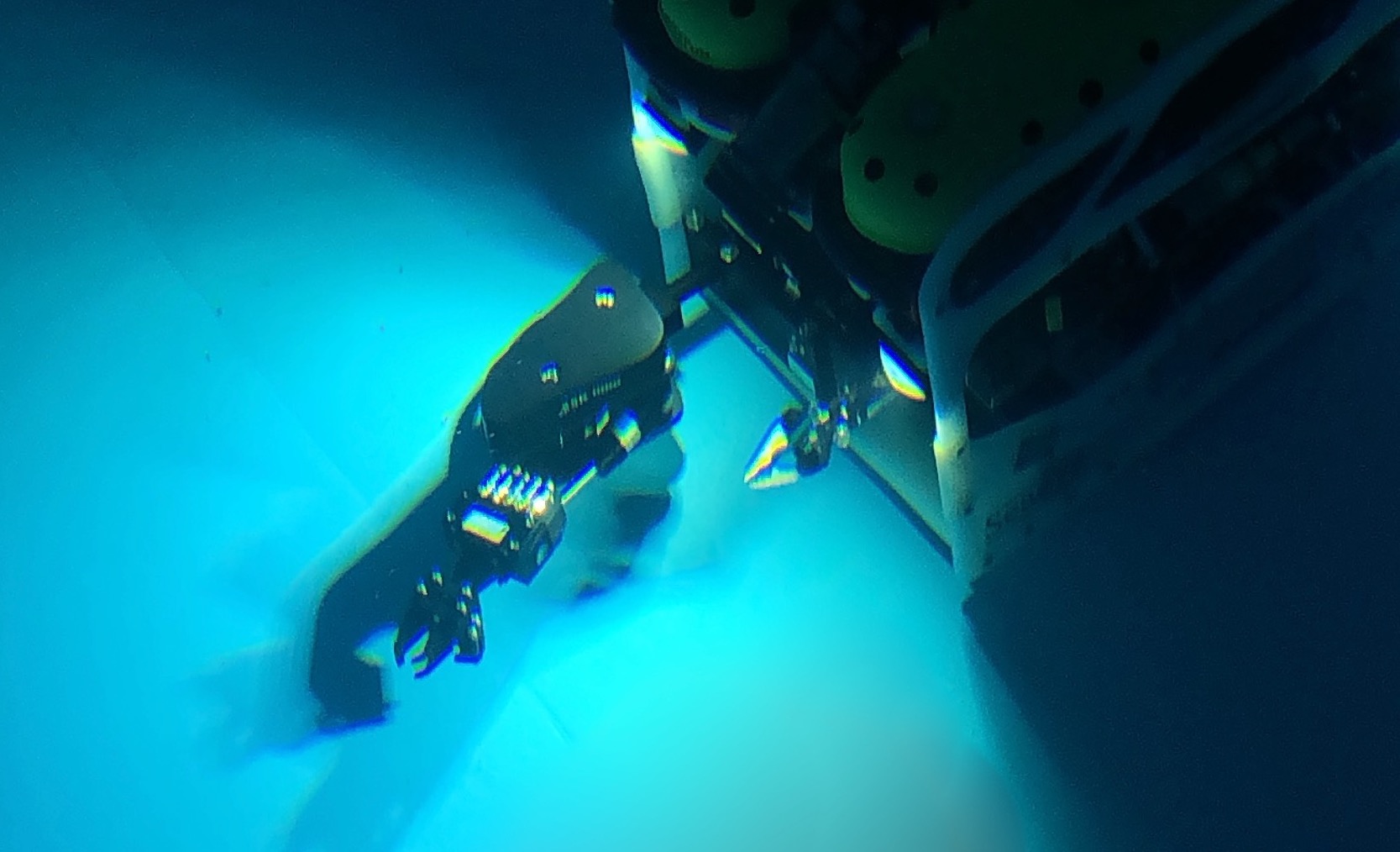 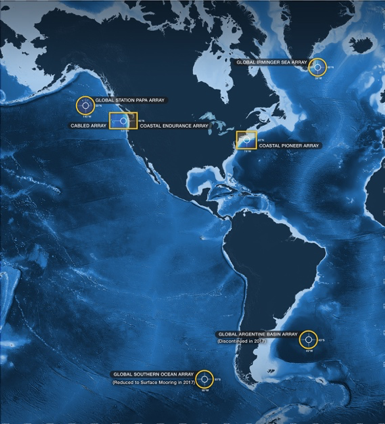 Locations of the Coastal, Global and Cabled Arrays that are part of the NSF-funded Ocean Observatories Initiative.
(Illustration by U. Washington Center for Environmental Visualization, modified by WHOI Creative)

After deploying a third party ROV for several years it was concluded that a dedicated underwater robotic vehicle could be a significant addition to the suite of tools available to the program and provide operational flexibility, as well as scheduling and budget optimisation.

The Falcon, already the most successful vehicle of its class in the world, won a competitive contract against multiple vendors.

It met the general requirements for a vehicle that can operate in 450m of water, with a 1000m option, has a multi-function manipulator arm and navigation system, and can work from either a dynamic positioning, or non-dynamic positioning vessel.

A 1100m umbilical cable run will not only allow the Falcon to operate from a non-dynamic positioning vessel, but allows multiple re-termination before needing replacement.

The Falcon will conduct operations in support of mooring deployments and recoveries. This will include inspections of instruments and mooring systems, as well as attaching rigging or unfouling instruments to allow recovery of assets.

Derek Buffitt, the Coastal & Global Scale Node (CGSN) program manager, says the Saab Seaeye Falcon was selected because it provided the best overall capabilities, has a significant tooling and spares package and comes with training and support for new OOI operators. It also met the strict budget and delivery schedule required by the OOI and the National Science Foundation.

At-sea training was completed in March 2019, along with verification of mobilisation and demobilisation requirements, integration of navigational systems, and included operating the vehicle in currents and performing test recoveries of CGSN anchor types. 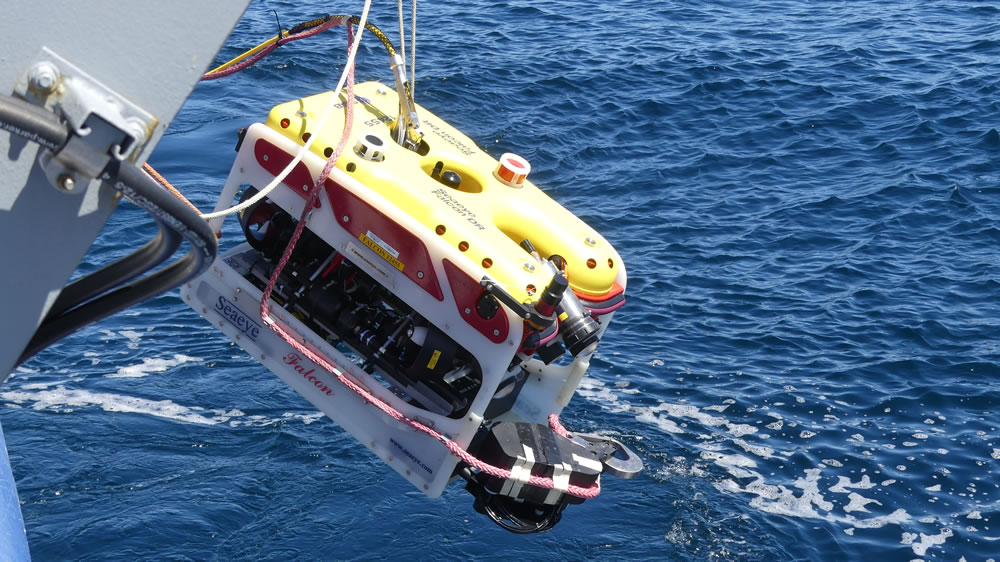 First project deployment of the Falcon was in April onboard the RV Neil Armstrong. During the multileg 21 day cruise, the CGSN team successfully performed mooring inspections and anchor recoveries. Future operations could take place in water depths of up to 450m and will include surveying mooring locations, locating existing anchors, and engaging hooks and lines for recovery of anchors.

The next planned deployment is on the Endurance Array for Oregon State University. The Falcon will be mobilised on the RV Elakha and will support shallow water anchor inspections and recoveries.

Derek Buffitt reports that the OOI team are looking forward to operating the Falcon further and that the small form factor of the vehicle has allowed for efficient mobilisation and quick project turnarounds. 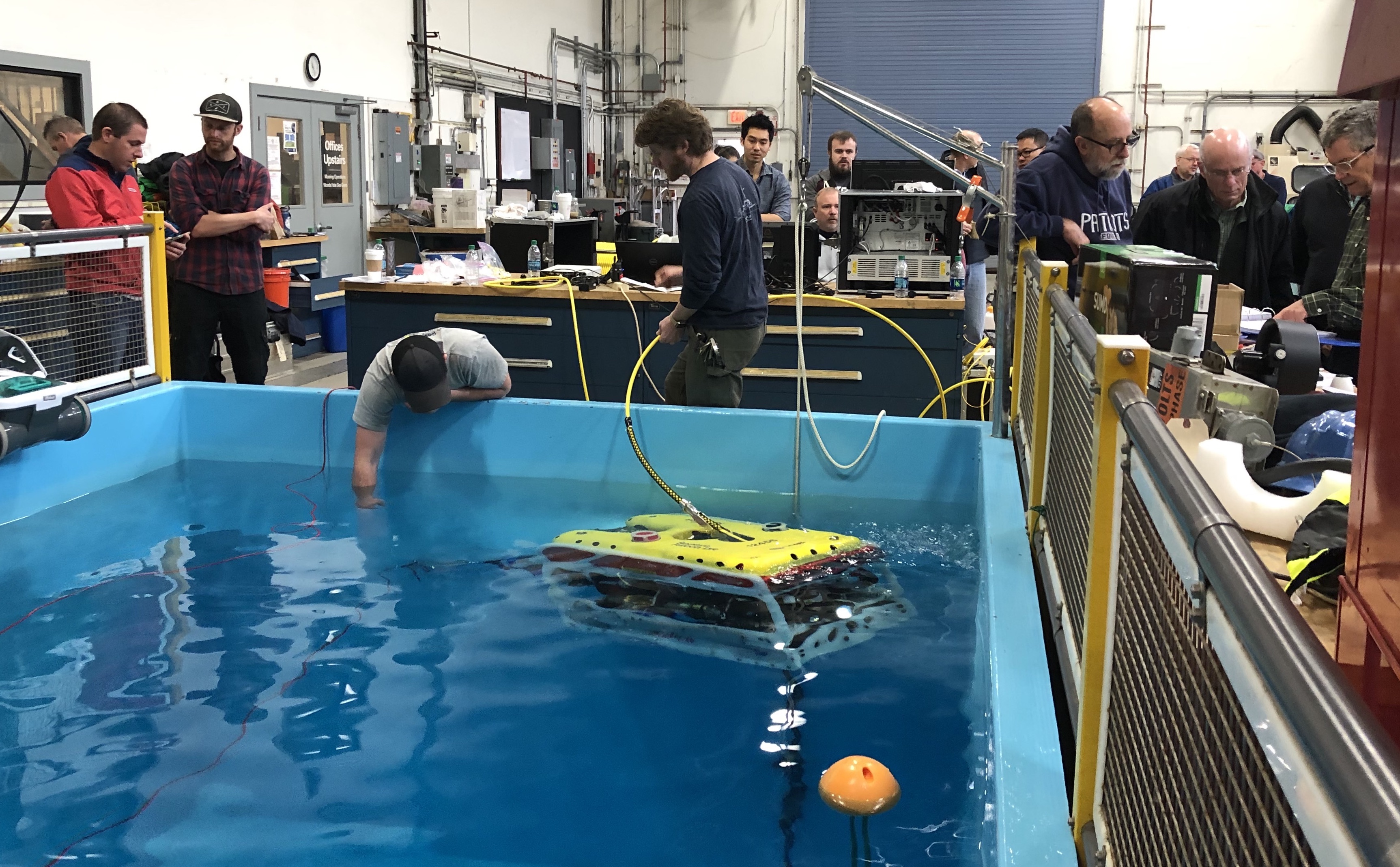 For operators a key advantage of the Falcon’s intelligent power and control is its high manoeuvrability and mastery of strong crosscurrents whilst undertaking exacting tasks with steadiness and precision.

The Woods Hole Oceanographic Institution is a private, non-profit organisation on Cape Cod, Massachusetts, dedicated to marine research, engineering, and higher education. Established in 1930 on a recommendation from the National Academy of Sciences, its primary mission is to understand the oceans and their interaction with the Earth as a whole, and to communicate a basic understanding of the oceans’ role in the changing global environment.

The National Science Foundation-funded, Ocean Observatories Initiative is an integrated infrastructure program composed of science-driven platforms and sensor systems that measure physical, chemical, geological and biological properties and processes from the seafloor to the air-sea interface.